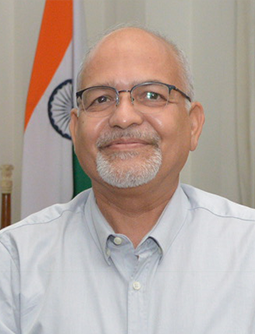 Prof (Dr) Ravindra Panth is an erudite Buddhist Scholar an expert of the ancient Pali language. He has deep understanding of the teachings of Buddha and their application. He also has in-depth knowledge on the Buddhist Heritage of India and its importance. He has edited and published more than 20 books and has written75 Research Papers.

He remained the Director/VC of Nava Nalanda Mahavihara (NNM), Nalanda, a unique Institution under the Ministry of Culture, Govt. of India, from 2000 to 2016. While at NNM, he was responsible for some most noteworthy achievements like – the unique long term research Project of Compilation, Edition & Publication of multiple volumes of Pali-Hindi Dictionary for the first time in India, resounding success of research based projects - ‘Mapping of Nalanda, Rajgir and around’, ‘Engaged Buddhism’ and ‘Revival of the Ancient Buddhist Pilgrimage in Bihar’, to document and promote the works of Xuanzang. He was also responsible for the completion and inauguration of the “Xuanzang Memorial” at Nalanda.

He also has the honour of serving as the Director, Vipassana Research Institute for 14 years devoting to Patipatti (practice) and Pativedan (experience) under the guidance of Vipassana Acharya Dr S N Goenka.

He also worked as an Advisor for the documentary film - ‘Pilgrimage Journey of Xuanzang’ prepared and produced by China Central Television, Beijing.

Due to his achievements in the field of Buddhist Studies, Ministry of Religious Affairs, Government of the Union of Myanmar conferred the prestigious title of MAHA SADDHAMMA JOTIKADHAJA in recognition of his contribution to the purification, perpetuation and propagation of Buddha’s teaching in 2008.

On 24th August, 2014, he was given the Lifetime Achievement Award at the International Festival of Buddhist Heritage of Ladakh 2014, in Leh, for his unique contribution in the promotion and preservation of Ladakh’s rich cultural heritage.

On 1st November, 2014, in recognition for his outstanding leadership and contribution for development of Buddhism he was awarded Buddhism Today Award for Leadership Excellence, in Ho Chi Minh City, Vietnam.